Can history be described by mathematical formulae? en-US

In a previous post, I talked about how a few random events can greatly change history. In this post, I will describe that idea more mathematically.

Let’s say I throw a rock straight up into the air and measure how far away it falls 10000 times. I have too much free time. I can plot that distance against the number of falls. You would expect most of them to fall very close to where I threw the rock. You would expect far-away falls to be pretty rare.

We might suggest that this fits a Gaussian distribution (that’s what most people associate bell-curve). Most physical phenomena roughly follow a Gaussian distribution. Towards the far right, the probability is very small. It should be rare that I would toss a rock straight up in the air and see it land 20 meters away. The far left and far right are called the ‘tails’ of the distribution. 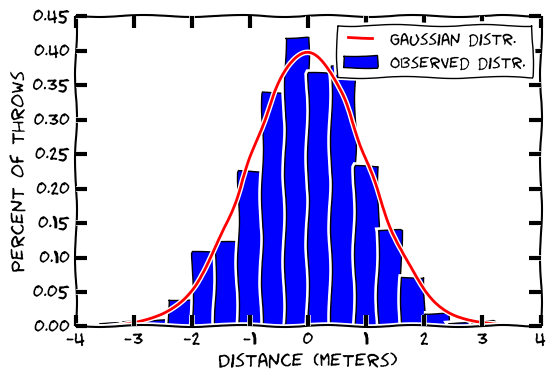 But I want to talk about another distribution: the Cauchy distribution. It is very similar to the Gaussian distribution, but it is ever-so-slightly higher at the tails (hence it is called a fat-tailed distribution). This means that extreme outcomes are still rare, but slightly less rare. People often too quick to assume that a bell-curve shaped distributions are Gaussian, as some would argue. 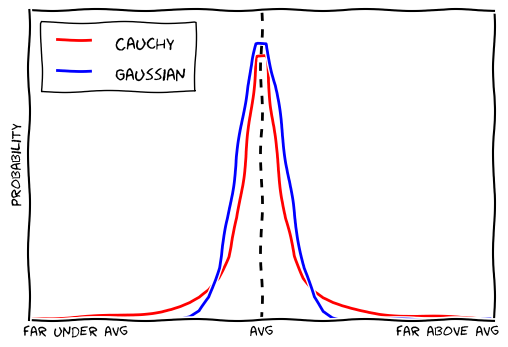 In the Gaussian random walk, no single rock-throw really moved us far from the origin. None of the throw were really ‘out there’. In each Cauchy random walk, most of the throws didn’t affect the outcome that much, but there were one or two really impactful throws that did most of the moving (especially in the blue and green random walk). Outliers are still rare, but when they do occur, they are hugely influential.

I suggest that many historical phenomena act have analogous behavior. One example might be, the assassination of Arch Duke Franz Ferdinand; another might be the Gulf of Tonkin incident, 9/11, or the battle of Thermopylae.

There are historical trends and forces, but they are often realized by single explosive events. There was a general trend of anti-imperialism in the early twentieth century. Even though most movements of that trend were minor, it only took one explosive assassination to change world history irrevocably.

Looking to the Future

The average value of a Gaussian or Cauchy distribution is zero (move neither to the left or to the right). On average, when we throw the rock straight up, it lands on top of me. The left moves will cancel out the right moves and it will end up not far from where starts (the distribution is symmetric). The average may be easy to predict, but reality might be different.

This is why markets are so difficult to predict. There are a few unpredictable and extreme events which cause most of the movement (called “black swan events”). On average, prices are constant or increasing steadily (due to inflation), but then the OPEC declares an embargo and the price of oil becomes 300% larger. Or hurricane Katrina hits. That is an unlikely and extreme event that screws up the models. Some argue that lack of recognition of black swan events played a part in causing the housing crisis.

Should we try harder to predict black swan events with models? There will never be enough data-points to do useful analysis of them because of their characteristic rarity. The best we can do is remember that every model is fallible and engineer the robustness necessary to handle that fallibility. These are “unknown unknowns” in the parlance of Donald Rumsfeld.